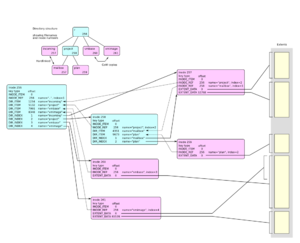 The diagram shows a simple subvolume structure, and the relationships between the different sets of keys (grouped by inode number).

Sometimes you want to make a list of all subvolumes under some /path in your filesystem.

One way to do it is to use btrfs subvolume list. However, this does not list directories with mounted subvolumes. It is also difficult to read it's output.

Using find might be an easier way. Lets say we want to look in /var: