Blog/Moose about to give birth 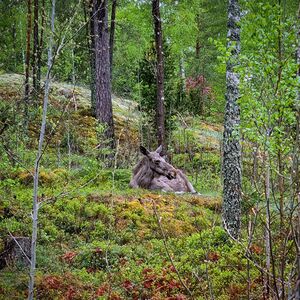 Pregnant moose having a rest as she is about to give birth.

Last evening, as I was heading out to have a nice relaxing swim at the pool I saw this Moose cow laying down to give birth. She seemed to not mind me at all, but I kept my distance anyway.

I feel such gratitude to be close to nature and being part of the wildlife.

The Moose in north American English is called Elk in British English. This is often confusing because in northern America there is another deer-species (Cervus canadensis) called Elk.

They are usually solitary beings, not forming herds like many of the smaller deer species. An interesting fact is that after the mating season in the autumn, the bulls drop their antlers and grow new ones in the spring. The moose has a great sense of smell and can detect food under snow and water, and it is happy to eat water growing vegetation. It as an ability to close its nostrils when browsing in the water.