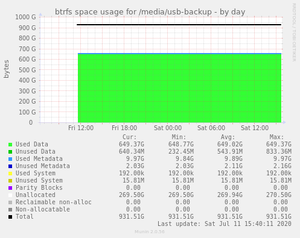 Unlike conventional filesystems, Btrfs uses a two-stage allocator. The first stage allocates large regions of space known as chunks for specific types of data, then the second stage allocates blocks like a regular (old-fashioned) filesystem within these larger regions.

The most common case these days when you get a -ENOSPC error on Btrfs is that the filesystem has run out of room for data or metadata in existing block groups, and that there is not enough unallocated space to allocate a new block group of correct type.

You can verify that this is the case by running btrfs filesystem usage on the filesystem that threw the error. If the Data or Metadata line shows a Total value that is significantly different from the Used value, then this is probably the cause.

What btrfs balance does is to send things back through the allocator, which results in space usage in the chunks being compacted. For example, if you have two data chunks that are both 40% full, a balance will result in them becoming one chunk that's 80% full. By compacting chunks, the balance operation is able to convert the empty chucks into unallocated space that can be used for new applications.

It is important to run btrfs balance before you run out of unallocated space. A common way is to set up balance as a scheduled maintenance task.

There have a few options to correct ENOSPC errors, depending on why they were caused.

Always do recovery options from a root shell, not from a GUI, file manager or similar.

Even if you balance data regularly, you can end up with a full disk by simply writing to many files to it. Writing files requires additional metadata and Btrfs may need to allocate additional metadata chunks to do that, which is not possible on a full filesystem.

When ENOSPC happens, Btrfs will change your filesystem to read-only to protect itself. This may seem counter-intuitive as it prevents you from deleting stuff.

Please note that deleting snapshots, deleting ref-linked files and de-duped files can cause additional metadata allocation, which brings you back to ENOSPC again.

When you can't delete files without going ENOSPC[edit | edit source]

Only way to recover now is to add additional devices to your Btrfs filesystem.

Same steps as before:

Now you need to find another device that you can add to your filesystem for a short period, for example a USB-stick.

Here, I assume your USB device is /dev/sdc1

This is because data and metadata chunks are allocated according to the profile used.

Sometimes a balance operation can get stuck or cause ENOSPC errors itself. This can lead to the filesystem turning read-only.

The kernel will resume any balance operation on any remount. To prevent this you have to use mount -o skip_balance.